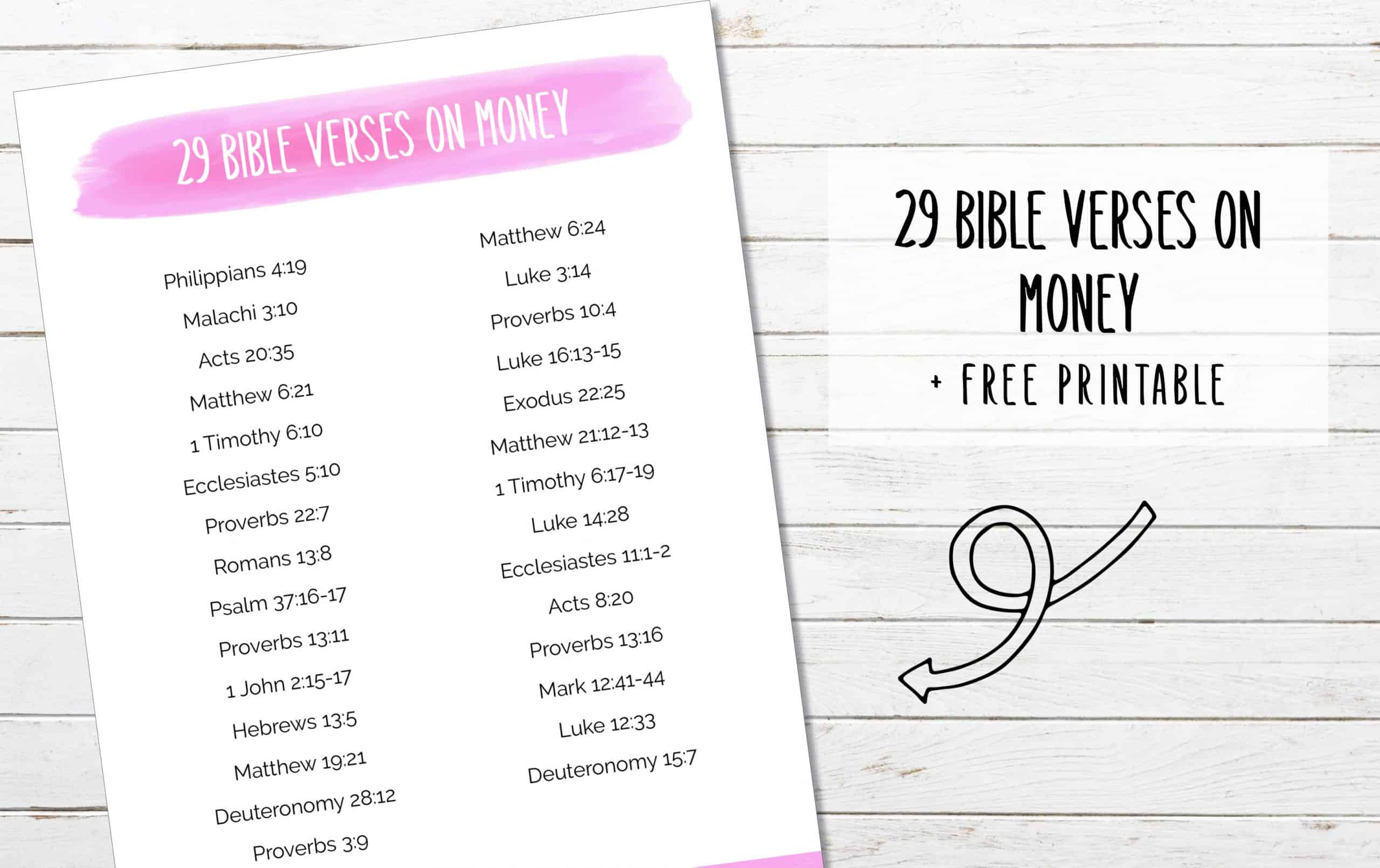 Money, we can’t live without it.

But what does the Bible say about it?

Is it ok to acquire wealth?  How should we use our money? What about the poor?

Scripture is often misquoted to say that money is the root of all evil, but that is not correct. It actually says that the love of money is a root of all kinds of evil.  So, there is no problem with having wealth, but it’s our attitude to it and what we do with our money that counts.

The Bible encourages us to be wise when it comes to our money and to be generous to others with what we have been given.

Here are 29 verses about money for you to reflect on.

My God will supply every need of yours according to his riches in glory in Christ Jesus.

Bring the whole tithe into the storehouse, that there may be food in my house, and test me now in this,” says Yahweh of Armies, “if I will not open you the windows of heaven, and pour you out a blessing, that there will not be room enough for.

In all things I gave you an example, that so laboring you ought to help the weak, and to remember the words of the Lord Jesus, that he himself said, ‘It is more blessed to give than to receive.’”

For where your treasure is, there your heart will be also.

For the love of money is a root of all kinds of evil. Some have been led astray from the faith in their greed, and have pierced themselves through with many sorrows.

He who loves silver shall not be satisfied with silver; nor he who loves abundance, with increase: this also is vanity.

He who loves silver shall not be satisfied with silver; nor he who loves abundance, with increase: this also is vanity.

Owe no one anything, except to love one another; for he who loves his neighbor has fulfilled the law.

Better is a little that the righteous has, than the abundance of many wicked. For the arms of the wicked shall be broken, but Yahweh upholds the righteous.

Wealth gained dishonestly dwindles away, but he who gathers by hand makes it grow.

Be free from the love of money, content with such things as you have, for he has said, “I will in no way leave you, neither will I in any way forsake you.”

Jesus said to him, “If you want to be perfect, go, sell what you have, and give to the poor, and you will have treasure in heaven; and come, follow me.”

Yahweh will open to you his good treasure in the sky, to give the rain of your land in its season, and to bless all the work of your hand. You will lend to many nations, and you will not borrow.

Honor Yahweh with your substance, with the first fruits of all your increase:

“No one can serve two masters, for either he will hate the one and love the other, or else he will be devoted to one and despise the other. You can’t serve both God and Mammon.

Soldiers also asked him, saying, “What about us? What must we do?”

He said to them, “Extort from no one by violence, neither accuse anyone wrongfully. Be content with your wages.”

He becomes poor who works with a lazy hand, but the hand of the diligent brings wealth.

No servant can serve two masters, for either he will hate the one, and love the other; or else he will hold to one, and despise the other. You aren’t able to serve God and Mammon.” The Pharisees, who were lovers of money, also heard all these things, and they scoffed at him. He said to them, “You are those who justify yourselves in the sight of men, but God knows your hearts. For that which is exalted among men is an abomination in the sight of God.

If you lend money to any of my people with you who is poor, you shall not be to him as a creditor. You shall not charge him interest.

Jesus entered into the temple of God and drove out all of those who sold and bought in the temple, and overthrew the money changers’ tables and the seats of those who sold the doves. He said to them, “It is written, ‘My house shall be called a house of prayer,’ but you have made it a den of robbers!”

Charge those who are rich in this present world that they not be arrogant, nor have their hope set on the uncertainty of riches, but on the living God, who richly provides us with everything to enjoy; that they do good, that they be rich in good works, that they be ready to distribute, willing to share; laying up in store for themselves a good foundation against the time to come, that they may lay hold of eternal life.

For which of you, desiring to build a tower, doesn’t first sit down and count the cost, to see if he has enough to complete it?

Cast your bread on the waters; for you shall find it after many days. Give a portion to seven, yes, even to eight; for you don’t know what evil will be on the earth.

But Peter said to him, “May your silver perish with you, because you thought you could obtain the gift of God with money!

Every prudent man acts from knowledge,but a fool exposes folly.

Jesus sat down opposite the treasury, and saw how the multitude cast money into the treasury. Many who were rich cast in much. A poor widow came, and she cast in two small brass coins, which equal a quadrans coin. He called his disciples to himself, and said to them, “Most certainly I tell you, this poor widow gave more than all those who are giving into the treasury, for they all gave out of their abundance, but she, out of her poverty, gave all that she had to live on.”

Sell that which you have, and give gifts to the needy. Make for yourselves purses which don’t grow old, a treasure in the heavens that doesn’t fail, where no thief approaches, neither moth destroys.

If a poor man, one of your brothers, is with you within any of your gates in your land which Yahweh your God gives you, you shall not harden your heart, nor shut your hand from your poor brother; but you shall surely open your hand to him, and shall surely lend him sufficient for his need, which he lacks. 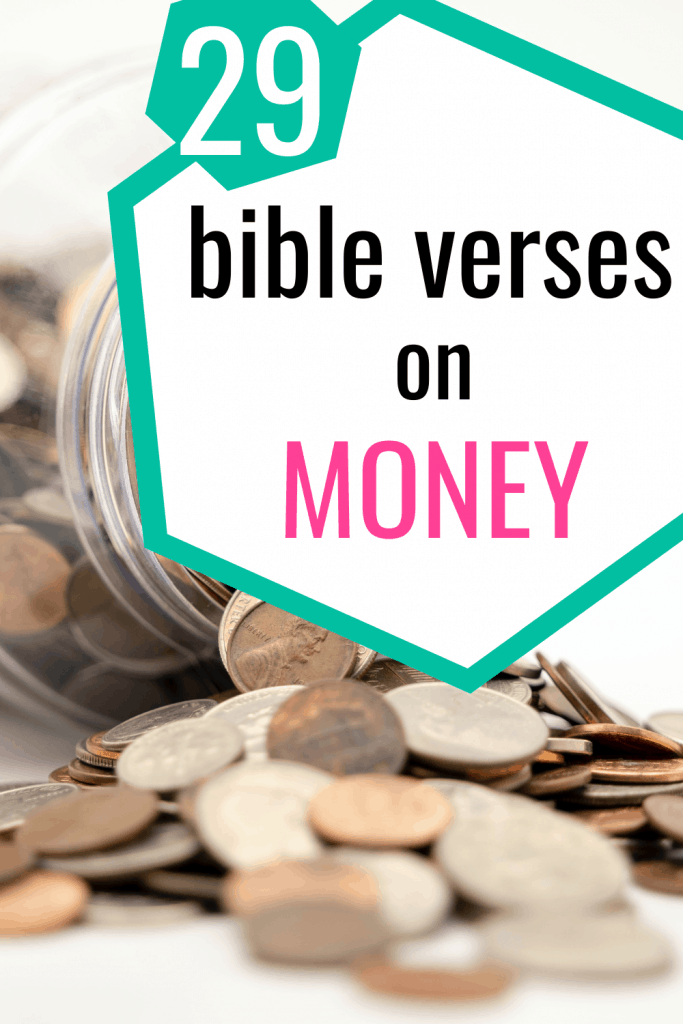 Marriage is not easy.  Falling in love is easy, but marriage can be hard work.  Marriage relationships require unconditional love and forgiveness from both parties, and a commitment to making a life together. Ecclesiastes 4:9-12 says that two are better than one as they can help and support each other and verse 12 says that… 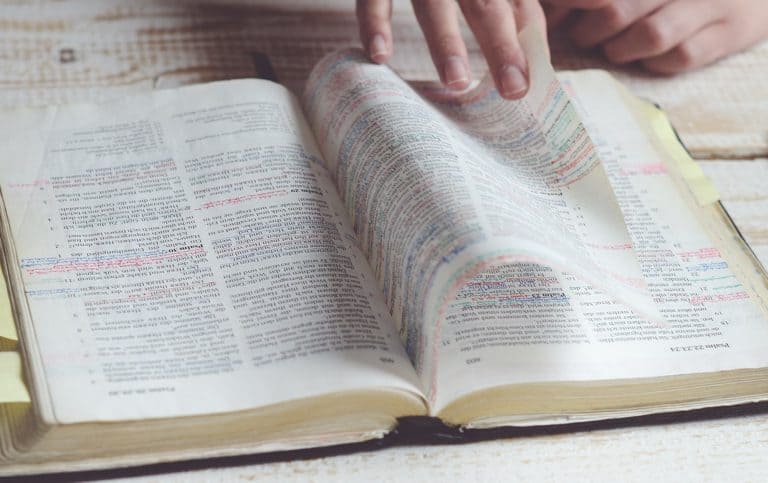 I love the old hymns!  Don’t get me wrong I also love the more contemporary worship songs too.  But there’s something about those old hymns that can be found in the Bible. There is such a richness and depth in their words, and often they are based directly on the principles and doctrines of the…

Love is an amazing gift, and a powerful emotion. God’s love for us, our love for God, our love for each other. Meditating on God’s Word and reflecting on what the Scriptures say about love will  encourage you in your faith journey as you see how amazing and unconditional God’s love is. The Bible has…